Ballmart is a recurring location in Squidbillies. The store is a parody of the infamous Walmart building. The building was first seen in its own episode with the same name "Ballmart". Since then, the Ballmart building has made many appearances throughout the series.

Several people such as Sheriff, Rusty, Krystal, Sheila, Bobby, Leroy, Billy, a man running the store's local pharmacy, and an unnamed employee, are seen working as employees there while citizens in Dougal County visit the store to shop on supplies such as food. The store also has its own security system with security guards and cameras.

Ballmart also has had its own share of problems and issues over the series such as Dan Halen banning the Confederate Flag, its own "Black Friday", Early bringing his sasquatch cooler into the store, while smoking up the store with gas, and the store currently doesn't allow freedom of speech or any freedom of any kind. The most-recent problem that the store has faced was a head lice outbreak, as shown in the episode "The Liceman Cometh."

Due of the lack of freedom in Ballmart, as shown in "One Man Banned", Early, Sharif, Tammi, and Glenn, as the Banisher, were all banned from this store for several reasons from Bobby. Rusty and Granny were also respectively banned there, also came out into the store as disguises such as a man and a horse to get morning-after pills from the store's pharmacy and sneak some diet Pineapple soda, which Granny needed, but we're both caught by both Leroy and Bobby since they we're no longer supposed to be in Ballmart.

The store colored in whites, grey and many other colors like the word "Ballmart" logo colored red. Christmas and "Fourth of July" variations of this store appeared in "The War on The War on Christmas". The store has a large parking lot in its later appearances.

The store has some attractions such as a deli, food section, clothes section, a pharmacy, and a sports section. A unicorn arcade game appears in "Drone to the Bone", a "job chart", and has it's own "Black Friday" every year in "Thanks-Taking".

Employee's also have jobs like stocking shelves and greeting people that are walking inside. The current greeters at Ballmart are both Bobby and Leroy. However, Galvin did pretend to be a greeter there until he got kicked out.

This store was part of the main plot of the episode as Dan Halen pulls a gigantic Ballmart and drops onto the streets of Dougal County, where the citizens all visit the store. Early who worked there is conflicted with the fact that it replaces the convenience store that he usually robs. Rusty thought they could go on strike for higher pay and lower hours and even lobby Congress to give tax breaks for domestic factory jobs while later Granny wanted to file a an anti-discrimination suit. However, Early wanted to rob the place instead for the money. The store is said to have a long group of connected air-vents that was planned as it implies a gold mine of gold is located down the Earth's crust. There is also a confession room.

The store sells many products such as:

"Keeping It in the Family Way"[] 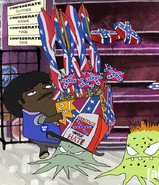 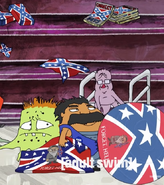 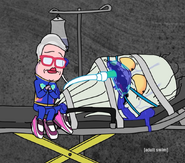