An unnamed wife
Boyd is a soft-spoken, passive, elderly, bearded clerk of the local town convenience store. Early has robbed and shot him on numerous occasions, with Boyd aware the entire time who he is, but is too compliant to stop him. Despite being robbed constantly by Early, Boyd is friendly towards him.

Boyd is voiced by Pete Smith, who previously worked with Adult Swim. Pete Smith retired from Adult Swim on September 28th, 2017. Like Reverend, Boyd's character has been somewhat retired from the show, aside from a few non-speaking cameos.

Boyd plays a minor role in numerous episodes, usually seen as a background character, or a victim of Early's actions. He is usually robbed for unknown reasons most of the time.

In the episode "Krystal, Light", he even suggests Early take all his scratch-off tickets instead of picking only a few tickets to steal.

In the episode "Pile M for Murder", he is shown to be a member of the Dougal County zoning board along with Early and The Sheriff.

In the episode "Velvet Messiah", it is revealed that Boyd has a wife who he is apparently unable to satisfy anymore.

He stood up to Early in "Gun of a Son" by threatening him with a shotgun by shooting his bag off (with the shotgun pellets glazing his head too!).

In "Dove In An Iron Cage", Boyd was revealed to have leukemia, and he didn't any health insurance, so his wife shot him and blamed it on Rusty so she can collect life insurance, resulting into Boyd's death.

Boyd's latest and most recent appearances to date in the show are a non-speaking cameo in the episode "The Knights of the Noble Order of the Mystic Turquoise Goblet", despite his death in "Dove In An Iron Cage", a small cameo in Sheriff's flashback in "Who-Gives-a-Flip?", at the 1996 summer Olympics, and he appears on the Cuyler's family tree in the series' final episode "This Show Was Called Squidbillies." 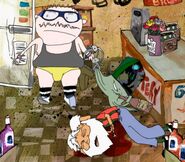