The Cuyler home is the location where most of the Cuyler family lives most notably Early Cuyler, Rusty Cuyler, and Granny Cuyler, and is also the headquarters of Lil's P-nuts and Hairdos. Usually Sheriff and sometimes Dan Halen would often visit the house.

May 27 1700s It is considered to be in a very terrible condition as it doesn't have a bathroom of any kind, but rather it has a outhouse where the family does their private activities, which notably appears in the episodes "Burned and Reburned Again" and "Webnecks but appears to be nice at the same time." The house also contains no rooms, except for a basement in the center. There's no that much furniture except a television, a large stool (which was roped to a bathtub in "Bubba Trubba"), some beds, a Patrick Swayze poster, and sometimes a table can be seen in the house. A lightbulb can be seen on the celling in the episodes "This Show Is Called Squidbillies" and "Rebel with a Claus."

This house has appeared in almost every single episode of the show, with some exceptions such as "Taint Misbehavin'" and "Vicki." A basement of the house is rarely seen in the show but it appears briefly appeared in "Flight Of The Deep Fried Pine Booby" and was seen fully in the episode "Need for Weed." The home also has a consistency of being destroyed in many episodes such as being lighted on fire in the episode "The Unbearable Heatness of Fire", burned in "Meth O.D. to My Madness" and was blow up by gasoline at the end of "Wing Nut." 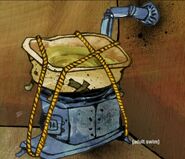 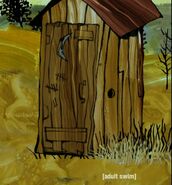 The outhouse seen in "Burned and Reburned Again." 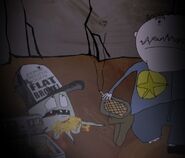 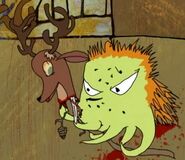 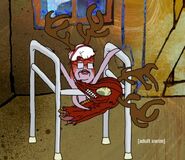 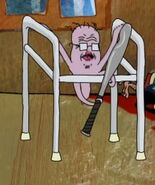 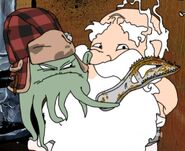 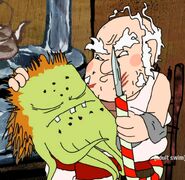 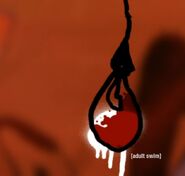 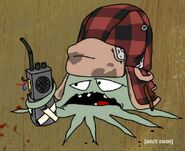 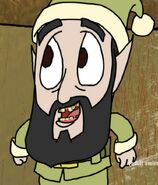