Dan Halen Sheet Rock International is a large building and an industry owned by Dan Halen. According to Dan, the building is the largest building in "Appalachia" in the episode "Rich Dan, Poor Dan". The building is located in the middle of Dougal County, a town that he owns. This building has been featured in numerous episodes.

In the episode, "Rich Dan, Poor Dan", Dan Halen suffered from bankruptcy after not paying anything, Denny also had to let a group of Mexicans to take all of Dan Halen's possessions to the bank. The office of the building was eventually emptied out and everything in the room was abandoned.

The building is a large workplace with many employee's working there, most notably; Early Cuyler, Glenn and Shawn Coleman. According to Dan Halen, he had over hundreds of employee's working for him. Every year Dan Halen Sheetrock International had to make their Sheetrock's thinner and thinner to make the knot, until the "paper-thin walls" came crashing into the building's walls.

Since the building is very large, the top of the building ends at the sky and reaches to the beginning of space. Sheriff and Deputy Denny also work for Dan Halen as part of the local law enforcement of the county.

Dan Halen has a office with a yellow desk and a chair, the walls are completely colored in browns, the building also has Dan Halen's logo on it, located pretty much anywhere. The building has other rooms such as a work office that has desks, shelves, a coffee machine where people usually get coffee from, the word "No" appearing red letters appears on the wall as a white card, papers/articles appear on a clipboard saying words such as "Choke", "Stop EEOE", "Kittens" and "Bunny Ys For Sale", with a small picture of a small rabbit below, and Glenn usually works in this office, which appears in many episodes of the show.

In the episode "Lerm", the coffee machine was replaced with a copier instead. A large room interior seen in "S12E5" and regular business rooms. The office also has a elevator used for transportation located in Dan's own office. Though, in the episode "The Appalachian Mud Squid: Darwin's Dilemma", a coping machine was present.

Dan Halen's home was seen for the first time in "Rich Dan, Poor Dan", which could presumably part of the building. The home also had many possessions, which were taken away by the Mexicans.

Many of the various products Dan Halen has owned, produced or has a possession of are: 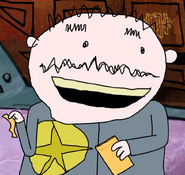 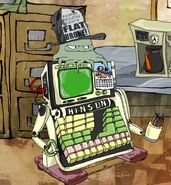 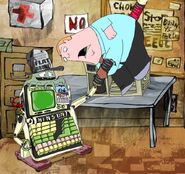 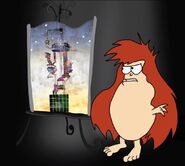 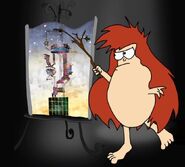 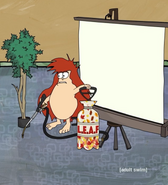