Brother of Early, Lil, and Durwood. Shannon Son of Granny, and Ga Ga

Dr. Bug Cuyler is a minor character in Squidbillies.

Dr. Bug often shows a kind heart, he also doesn't possess the stereotypical southern accent like the rest of his family. The Doctor seems to be able to make a diagnosis rather quickly and can perform surgeries. Dr. Bug seems to have some resentment of being a Cuyler, as he is constantly denying being related to the family when being told that he is also a squid of the same species.

Dr. Bug is a large squid who works as a doctor at the local hospital. He is the abandoned son of Granny, and Ga Ga Pee Pap, but takes great pains to hide this fact, and distance himself from the family.

In the episode "Family Trouble", Early urinates on a rabbit meant to determine if he is pregnant, as the rabbit dies, it gives off a purple smoke indicating Early has a twin. Dr. Jerry points this out to Bug, who replies repeatedly "only child," while quickly making his exit.

In "Asses to Ashes, Sluts to Dust," a hospitalized Granny, thinking she was on her death bed, tells him that she "never meant to flush him down the toilet," and that he was "always her favorite". Apparently in grudging recognition of this family connection, Bug then surreptitiously offers to donate his gallbladder to save Granny's life.

Dr. Bug made a non-speaking appearance in the episode, "Sharif", where he is seen walking with most of his skin ripped by Dan Halen's Ice Wind.

He hasn't made any appearance in a episode since, Until his sixth and final appearance in the series finale "This Show Was Called Squidbillies, where he was seen in Granny's Funeral. 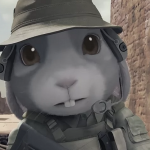