Herschel Walker Cuyler Them Dawgs Is Hell Don't They

Early's nephew and son of Lil

Herschel Walker Cuyler Them Dawgs Is Hell Don't They, AKA Herschel Walker, is the infant son of Lil Cuyler and an unknown man, who is never mentioned nor seen in his debut episode. He is also the nephew of Early Cuyler. Herschel is the brother of a large litter, however, he did not associate with them, and would rather act like Early. He has never had a proper speaking role and has said the same lines, which is for a strange reason the same yell given off by Early. Or maybe could be Early is the father of Herschel Walker.

Herschel was one of the many children given birth to by Lil, and was taken immediately afterward by Early to see "Saw III" with his siblings. However, the proposed trip to the cinema was just Early's thinly veiled attempt at exterminating the unwanted children, and the Sheriff appeared just in time to save them. Alas, many of Lil's young were diseased, suffering from crack withdrawal, or pregnant. When the camera shifts, it is made evident that Herschel took it upon himself to dispose of some of his siblings by stabbing them to death. Herschel 's cold blooded attitude is revealed even further as he blows Sheriff's head off from the upper jaw. Such acts of random violence seem to soften Early's heart, and soon he accepts the child as a surrogate son. Herschel begins to act more and more like Early, and Early takes it upon himself to impart some fundamental life skills to the boy: drinking, shotgun operation, stealing, and breaking jail being prime among them. However, Herschel grows more violent and unpredictable under the savage tutelage of Early, and he finally leaves Early to die after being disfigured by a train- only returning briefly to take Early's hat despite his uncle's desperate pleas for help.

Herschel rarely shows emotion, sadistic grins and the occasional outburst of "woo!" being his primary methods of self-expression. He is generally depicted as being a baby version of Early though he seems even more prone to fits of random violence than his uncle-often killing characters for no given reason-whilst Early usually creates half-baked rationalizations for his crimes. Though Herschel seems to have a deep-seated hatred towards other characters, he does not seem to mind being ordered around by Early, and is willing to serve as his accomplice in various crimes. That is, until Herschel abandons Early, presumably to make his own way in the world. Herschel has mental issues. He seems to be mad.

"The Good One" Gallery[]

Lil's offspring after being fatally stabbed by their sibling. 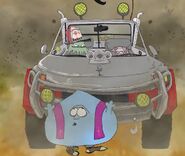 "This Show Was Called Squidbillies" Gallery[]