Various
Hippies are a group of minor characters in Squidbillies.

They are a group of Hippies that only appear in the episode "Earth Worst". Over two hippie groups are seen in this episode, with a female hippie is named "Dakota" and has a red ruby mood ring on hand. Every other hippie in this episode is unnamed. They were also called "Dirt People", and play with their bongos and sing.

They prevented two machines from Dan Halen Sheet Rock International from turning the forest into an amusement park called "Smokey Moon Jump", which failed the first time, though one of the machines did crush the Cuyler House, and put a Smokey Moon Jump next to it. They claimed that with the help of rhythms and vibes, they driven the machines away, which left for some thai food, or a barbecue as one of them mentioned. Dakota tells about mythological, semi-divine fairy called a "wood nymph", which the two believe to be real, and that lives in every tree. They most likely didn't want the machines to destroy the forest and its trees for this reason alone.

Originally four hippies were seen, but one of them was killed by a wood chipper and sliced in half, and another one with no eyes just simply ran away. Leaving Dakota and a male hippie, who encounter the Cuyler family; Early, Rusty, and Granny, calling them poor creatures. Though, the latter does threaten them with a knife. Early claims that he doesn't know if there was some kind of prevented sapsattica living on his land besides Latex Craig.

Dakota and a male hippie sing and dance to the music they make, using a banjo and their bongos for the nymph to come out, and put an end to all of the forest's destruction. They were shocked when Early uses his shotgun to blow up his head and brains. The male one calls Rusty a "mutant" on one occasion, while he drums on a bottle of alcohol using two wooden sticks, which he claims that he has a "earthly rhythm", and then the male hippie claims to dance with the elder, and bridge them with generational divide.

Dakota and a male hippie have sex after claiming that they were meant have a scent (a pungent musk), so they can hunt each other, and which was covered by a huge dusty cloud covering them, and Sheriff joins in on it. They do it for copulation.

In the summer of 1994, Sheriff revealed himself to a hippie and was the leader of some folks called a "commune", which was a hippie group. Later on, the hippies are seen in a arena around some ground and we're pulled and enslaved by a monstrous Sheriff with a large collection of skulls, and he bites the skin out of a hippie's leg.

Dakota and a male hippie play with a bullet shell from Early's 12 gauge shotgun, which they call a "hanky sack."

Dakota and the male hippie end up being killed by a nuclear bomb from Dan Halen, which was dropped down by him, causing an explosion, and burning the tree, which decapitates the female hippy and burns the male to death. The only thing remaining from those hippies was Dakota's severe hand and mood ring falling to the ground, and Rusty wears it as a necklace, which Early snatches away from him. 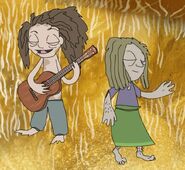