Squidbillies Wiki
Register
Don't have an account?
Sign In
Advertisement
in: The Cuylers, Male Characters, Deceased,
and 2 more

The Reenactment of the Repulsion of the Siege of Cuyler Mountain

Jefferson Beauxregard Cuyler, or simply known as Jefferson Cuyler, is a silent minor character in Squidbillies.

Jefferson Cuyler is the great-granddaddy of Early Cuyler and stepbrother of Rusty Cuyler. He exclusively appears in the flashbacks for "The Reenactment of the Repulsion of the Siege of Cuyler Mountain", taking place in the year 1864. Jefferson Cuyler is never shown speaking in the episode. His color is unknown, except that he has a brown beard.

Jefferson Cuyler existed since the Civil war times, as he single-handedly defended this mountain from a union brigade for two straight days using nothing but one single solitary cannonball, but he didn't even have a cannon. He was shown next to a confederate flag.

Jefferson Cuyler is seen with a bunch of soldiers, and a cannon when a bottle of alcohol is handed to the soldiers. He is presumably a alcoholic, because he is shown grabbing the said bottle and drinking it over two times, between giving it to the soldiers.

Jefferson Cuyler was also known for defeating Bill Sherman's army for two whole months in the Winter. He killed over 150 soldiers with his single cannonball, and he'd climb up in the tree, and drop it on their heads like a coconut, and he would carry it back up. Bill Sherman, who was the leader of the said army couldn't stop the ball from killing him. In a podcast, Ollie thought it was a blatant lie and it didn't actually happened.

Jefferson had a whole "sumbitching" arsenal of balls, such as a magic ball, that he would hit soldiers in the head and it would return back to him just like a boomerang. He can shake that thing and it had a little window in it that would pop up, and tell him where the opposing troops were.

Rusty portrayed as Jefferson Cuyler in a reenactment of the Civil War times, finding the cannonball, and rolls it for two days straight.

Also in the reenactment, when Jefferson drank lead from the coat button, from boiling a coat in muddy water, called "rebel broth", which leeched into his mind and body, and then spent his final hours hallucinating that he was Rififi, the Queen of the Birds, trying to hatch an egg, which was the cannonball, this most likely never happened, due to it being a reenactment of some sort.

According to Ollie, Jefferson died when he expired from a combination of lead poisonous and an easily-curable infection gotten self-pleasuring with a poison sumac leaf. Though, this event was reenacted in the "Reenactment of the Repulsion of the Siege of Cuyler Mountain" event, this death implies that he died from this. 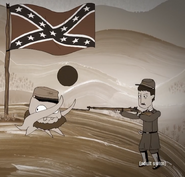 Rusty portrayed as Jefferson Cuyler, in the reenactment. He also has on Jefferson's hat. 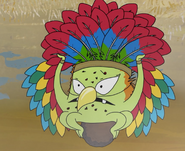