Squidbillies Wiki
Register
Don't have an account?
Sign In
Advertisement
in: Frequently seen, Female Characters, The Cuylers,
and 3 more

Mother of Rusty and Tammi

Krystal is the mother of Rusty Cuyler and the ex-wife of Early Cuyler, a morbidly obese Caucasian woman who lives her life lying on a filthy junkyard mattress, where she had been deemed a local landmark as "Georgia's first outdoor shut-in" and given "squatter's rights" to the location. She spends most of her time drinking from a re-usable oversized "Sip" convenience store cup and scratching lottery tickets. She has an extremely low and long-winded voice, speaking in a perpetual slur.

She also has a tramp stamp, a "tribute to our fallen heroes of 9/11", which the tattoo artist confused as being a tribute to the band 311. After being informed of the permanent mistake, she displayed ambivalence apropos of the character. In "Keeping it in the Family Way", she is revealed to be the mother of Rusty's human girlfriend Tammi. In "Rusty and Tammi Sitting in a Tree, B-A-S-T-A-R-D", she becomes a grandmother to Rusty and Tammi's inbred son Macho-Man Randy Cuyler.

Krystal is voiced by Mary Kraft.

Krystal is the town whore of Dougal County, Georgia with almost everyone in town having had at least one sexual experience with Krystal, such as Snakeman, Dr. Bug and a Mexican, also including the series' main character Early Cuyler. Her dalliance with Early led to the birth of their illegitimate son Rusty Cuyler.

She is often used as a target for Early's sexual assaults, however they often result in little success. Despite the fact that Krystal is morbidly obese, she is very rarely seen eating, but always has her "Sip" cup with her. Her extraordinarily promiscuous lifestyle (including having sex with Charlie Sheen and all of the members of .38 Special) caused problems during her brief marriage to Early. She had a Siamese-twin (who had apparently become trapped in Krystal's fat folds) named Amber Jean (making her Rusty's aunt), but she had her removed (Amber Jean is most likely dead, as Dr. Cock used a katana to separate the two women) in the episode "Krystal, Light."

Her cousin was revealed in "The Many Loves of Early Cuyler."

In "Keeping It in the Family Way", Rusty discovers that Krystal is also mother to his girlfriend Tammi. They mistakenly believe themselves to be cousins, although they are actually half-brother and sister.

Krystal is shown to be working at Ballmart in a couple episodes, starting with "Ballmart", and she often sells products that contain free samples such as shrimp and Butter Bomb Jalapeno Popperit Blasters.

Rusty as a fetus inside Krystal's body. 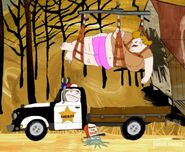 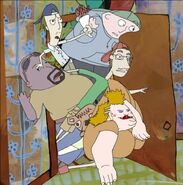 "The Liar, the Bitch and the Bored Rube"[] 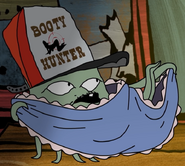 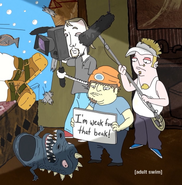 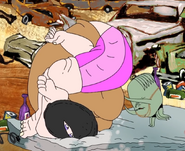 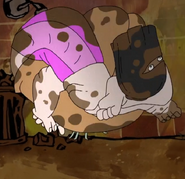