Unknown
Kyle Nubbins is a supporting character in Squidbillies.

Kyle Nubbins is the town's new reverend, after Reverend transferred to a different church in an another county, who first appears in "Greener Pastor" and is first seen at The Waffle Barn.

Unlike the original Reverend, Pastor Nubbins is a positive and good natured pastor who tries to help Early become a better person even in the face of stiff resistance of Early. He is also shown to be more tolerant and plays the guitar. However, even Nubbins' patience reaches its limits after Early steals Nubbins' guitar, following a failed attempt to convince Early to return stolen donation money. Like Ellis, he is one of the few people in town willing to physically stand up to Early, as shown when he attacked Early after he stole his guitar. However, he was willing to make a wager after Early suggested it and challenged Early to a faux-Sumo wrestling contest (wearing padded suits) which effectively Early lost. As per their wager, Nubbins got back his guitar and Early was forced to leave town after being dragged away by a medium-size dog. However, when Early promised to return, Nubbins reveals he knows and tells Early he will see him in church, showing that he accepts that dealing with Early is just a fact of life in Dougal County. He reappears in Rusty's jailcell in "Dove In An Iron Cage" in the prison for Rusty to read the bible and pray for Jesus Christ and later he shows up with other people singing "Amazing Grace" outside the prison, due to Rusty's case and trial.

Aside from being a Reverend, Nubbins also hosts other activities such as a potluck dinner at the VFW, funerals, building homes for the people living in Quetzaltenango, Guatemala and being the Reverend at Granny Cuyler and Dewey Duvall's wedding.

In the episodes "Tortuga de Mentiras", "Cooler-Heads Prevail", "The War on The War on Christmas" and "There's Sucker Porn Every Minute", he has had a couple problems with Early's antics such as the squid bringing his own Sasquatch Cooler into the church, which smokes up the church, causing people to leave, him for stealing copper wires from the houses built in Quetzaltenango, Guatemala, and burning his church, Early terrorizing people by changing the lyrics of the Christmas song "Silent Night" when singing a Christmas carol with him and others and the latter episode has him and the church attendee's leaving church earlier, which causes them to start protesting at a Motel because of Early creating his own illegal pornography in Dougal County. In "Zen and the Art of Truck-Boat-Truck Maintenance", he rolls up his mat and then leaves Yogi Daniel's Yoga Studio because of Early visiting the building, and at Early's yoga service; Early's Hi-End Xpensive Yoga, Nubbins stated "It ain't no form of yoga that I've never seen" as he left the service, taking his mat with him, obviously due to a lack of interest seen in any of Early's antics.

Nubbins has also hosted funerals, as shown in the episodes "Let ’er R.I.P.", and "This Show Was Called Squidbillies" respectively, including Granny's memorial in "Ol' Hootie." 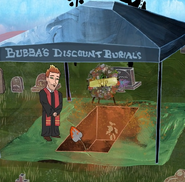