Let 'er R.I.P. is the second episode of the thirteenth season of Squidbillies. It first aired on November 7th, 2021, alongside "One Man Banned" on the same night on [adult swim].

Rusty works at a morgue. 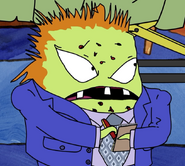