His own Snake farm

Owner of a Snake farm

Ray Wylie Hubbard is animated version of the real Ray Wylie Hubbard, who owns a snake farm in the episode 'Muscadine Wine." Russell "Rusty" Cuyler visits this farm to learn how to play and really be good at guitar and singing, in a professional level and wanting to do that today, due to his wife Tammi and his father Early singing "Muscadine Wine" in church, leaving Rusty very jealous.

Ray tells him that he has a problem with his lady, which Rusty then wanted to know, as he mentions that's the only reason why men play guitar, because women don't play guitar, as they are "too busy" making babies for men, who know how to play guitar. Ray then gives Rusty a guitar and tells him if he can follow Ray's guitar skills, who then sings, telling him to take the lowest sting of the guitar, called the "High E", to tune them down, both to "D". He then has to take the "A" sting, and then tune down to "G".

Rusty then has a apple-themed guitar while doing this, who claims that he looks like that he is shredding if he squints real hard. Ray then gives a piece of advice about women to him, claiming that there's more than one of them to find one who likes guys who can't play guitar. Rusty tells him that he loves his wife, which he calls a "women", which Ray can only tell him one thing, which is that the free guitar lesson that he took with Ray, which requires to buy a snake from the farm. He then pulls out two different types of snakes; which are a copperhead and a cotton-mouth. Ray then claims that today he has to move some snakes.

Offscreen, Rusty buys one of his snakes, which has orange and gray patterns, while wearing a pink bowtie, which is then killed by Tammi via shovel, at her doorstep. 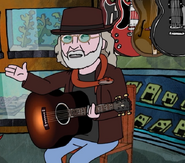 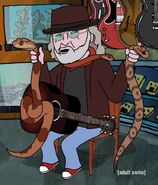