The Unbearable Heatness of Fire

Reptilians Aliens are a race of reptilian-like space aliens that wear tight red jumpsuits with white belts and live in outer space in UFOs, that arrive at wrap speed around 2:00 and use laser beams and technology, that the human race doesn't have yet. Two members of the species burn down the Cuyler's House and also steal water, such as a water dispenser, though one of the alien's does consider it to be a lizard-alien stereotype. These aliens heavily resemble modern-day reptilians such as snakes, lizards and geckos that also have a easement from the courthouse for an upcoming golf course. One small reptilian alien took over Sheriff's mind, which the latter has an alien drawing of them, though are depicted as snake people, before being killed by Early Cuyler, his son Rusty and his mother Ruby Jean, who was dressed as a costume of the aliens to disguise himself that was gunned down and destroyed by the Cuyler family, who knew about the snake people by Sheriff, since he has aliens on his own mind, for torching the house and wanted to protect the house from them by covering the windows with wooden planks, getting out weapons for defense, and covering the door with a stove, though Early does burn the house with a lighter despite the house being fixed earlier.

Two notable aliens appear in the episode, as the former is short and the latter is tall and named "Mike." These aliens watch the Cuyler family in their house on a monitor and Mike creates a hologram on the screen, which also look at them on their monitor later on. At the end of the episode, after throwing a green alien orb at the Cuyler House while Mike and his alien friend in their UFO then leaves, the orb burns the entire land which creates a large golf course named "Gecko Plains", where a couple of reptilian aliens are seen playing golf there, including Mike and his friend. 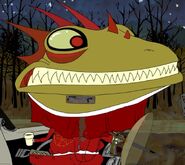