The Sheriff's Office is a major location on Squidbillies.

It is a sheriff's office located in Dougal County, between a dance studio and a regular building, seen in many episodes of the show. The office also has a desk, a jailcell inside the office for locking-up criminals such as Early Cuyler, and sometimes his family such as Herschel Walker Cuyler, and the office has other objects such as a clock on the wall. Sheriff, and Deputy Denny work in this office. The office interior changes in many episodes. The exterior of the jail is colored yellow, orange, brown, gray as it has a decoration on it. The jail's interior is colored gray.

In the episodes "The Big Gay Throwdown" and "Green and Sober", a shower room is visible.

In "Atone Deaf", the office was upgraded with new features, most notably, wind chimes, replacing the jail cells with much relaxing beds, a chair, a backdoor, and a huge HD television being presented.

The office was filled with boxes in "The Squid Stays In The Picture".

A confession room in the office is seen in "Dove In The Iron Cage". 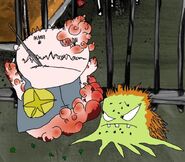 "The Unbearable Heatness of Fire"[]

"The Legend of Kid Squid"[]