Sheriff's mother is a minor character in Squidbillies. Her real name is Cordelia.

Cordelia is the mother of Sharif, the town's local Sheriff living in the town Dougal County. Cordelia is rarely seen in the show, limited to her voice being heard in a few episodes such as "Government Brain Voodoo Trouble", mentioned in some episodes such as "Thou Shale Not Drill" and "Tortuga de Mentiras", or a photo depiction of her saying "Mom" seen on the Sheriff's desk (though the image of her looks different) in the Sheriff's office. In the episodes "From Russia with Stud" and "Sheriff-In-Law", she is depicted in an iron lung and her head is seen in a tube. A much different looking picture of his mother is seen in "Blue Lives Battered".

When Sharif is letting his Russian bride to his house in "S7E6", Sheriff mentioned that he can move his mother's iron lung out of his living room and put her in the crawl space, she can be heard echoing from the iron lung. "S9E8" has Early falling in love with her in iron lung and marrying her, although Sharif didn't accept the marriage. Deputy Denny is later seen with Sheriff's mother sitting in a wheelchair at the end of the episode, but she dies of old age, as she couldn't breathe without being in the iron lung, and falls off her wheelchair at the same time.

In the episode "Tortuga de Mentiras" (mentioned above) when Early mentioned that he burned down Sheriff's house, Sharif runs away screaming "mommy!", this implies that she died in the fire and was still in her iron lung before Early burned the house down despite passing away in the previously mentioned "S9E8". 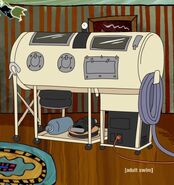 Sheriff and his mother's iron lung at the VFW after Sharif's wedding.

Early's photo of him and Sharif's mother in a iron lung.