Sheriff Clones are clones of the Sheriff from a cloning farm, and were cloned, and bred by Dan Halen from a illegal cloning farm along with Deputy Denny and Phil as one of the clones created.

Sheriff Clones started to debut in "Double Truckin' the Tricky Two", where one of them started beating up the Sheriff, and killed him.

A injured Sheriff clone appeared in the episode "Bubba Trubba", he got injured from a plane crash, and got clubbed in the head by Sheriff's silver baseball bat. It was later seen with the real Sheriff in the audience during a Plumber Bubba nighttime show at the Reverend's Church.

A cloning farm of Sheriff was revealed in "Survival of the Dumbest".

In "A Sober Sunday". The Sheriff clones have a larger role, where Sheriff clones are everywhere in the episode. Sheriff and Deputy Denny are seen with a newspaper with two other clones but two of them had take out a trash bag, a clone with a weird mouth is seen using a microphone during a sign. Most clones were shot and killed by the Sheriff.

Later Sheriff was ordered by Dan Halen for a entire army of Sheriff clones to travel in Dougal County to the courthouse, however they accidently entered a purple store that was Boyd's Convenience Store instead, and met Boyd. Later on, Reverend and Rusty drove an Ice cream truck to distract the clones (Reverend also departs from the truck by rolling away), and drive it to a large pile of fire, and all the clones started to start burning to death on fire (including Dan Halen, who was set on fire).

The clones mostly spent their appearances at the cloning farm in the third season. Dan Halen choose the town's sheriff in the episode "Sharif" by the use of the farm, however Deputy Denny ended up getting picked instead.

In the episode "The Okaleechee Dam Jam", when Dougal County was flooded from the waters of the Dougal County Dam, the Sheriff clones at the cloning farm all sunk into the waters.

In "The Big Gay Throwdown". The clones were seen again when Early and Rusty finding a clone to replace the Sheriff (who was gone because he was gay with Roger, and moved far away). Phil was chosen as the town's sheriff, but was killed, they also tried picked a buff and monstrous Sheriff.

In "Dead Squid Walking". One of them was being executed. A flashback also shown the same episode, where clones of the Sheriff were trying to stop Ga Ga Pee Pap's crimes.

In later episodes, the Sheriff clones and cloning farm are abandoned aside from the existence of Denny. A picture of the cloning farm appears in the "Fact Shack" in the episode "The Knights of the Noble Order of the Mystic Turquoise Goblet".

Phil is a poorly designed clone of the Sheriff with a Prop 421 sign who was Sheriff's brother from Kansas destroys Early's machine with a axe. He sounds similar Deputy Denny, due to his design, and voice. Ironically, Boyd calls him by this name that later in the episode. Like Deputy Denny, he is voiced by Dave Willis. 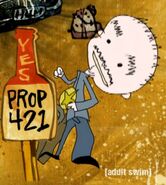