Snakeman is a resident of Dougal County. He is often seen having relations with Krystal or eating other residents, which have included onscreen characters and minor characters such as the Mexicans. His origins are unknown, but strange creatures are common in Dougal County.

Although he never talks, Snakeman is often seen interacting with the other characters through hissing.

Snakeman has never had a prominent role. He is instead seen in events as a bystander rather than being directly involved but will have his moments where he does become part of the story, like being the person with whom Krystal has an affair.

Despite having no talking ability, Snakeman has been able to understand the speech of others. He can also play chess and served in the jury for the Baby Death Trap. He has also participated in Early's hog hunting farm and is likely able to read as he attended the book fair to see Dean Koontz.

Snakeman has committed a few crimes in Dougal County, such as eating bystanders, one of the Mexicans and the town's sheriff a few times. He had a court sentence for eating his kids offscreen in "Stop, Jammer Time." He was locked in a jailcell in prison in "Dove In An Iron Cage", due to eating people.

Snakeman can be seen in the top left corner in the jury.

Krystal and Snakeman coming out of a community toilet/outhouse.

Snakeman's truck driving away from the Cuyler House.

Snakeman, wearing an orange prison suit, next to other prisoners.

Snakeman seen in the audience for the soccer ring. 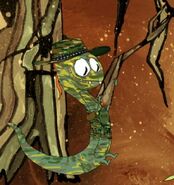 Snakeman in "Meth O.D. to My Madness."

Snakeman next to a few Mexicans in "Asses to Ashes, Sluts to Dust."

Snakeman kissing a squid in "Survival of the Dumbest."

Snakeman's skeleton seen in his truck that he is driving in "Sharif." His skin was ripped off by Ice Wind.

Snakeman in prison with a bunch of other prisoners.

Snakeman seen in a prison cell when a prison fight/riot happens.

Snakeman, in the jail cell, watching the prison fight/riot happening.