Devil
Squid Satan is a minor character in the Squidbillies. He is the squid version of Satan, Lucifer, or simply the devil and is the evil counterpart to Squid Jesus. He is a complete opposite by living in Hell instead of Heaven. This character consists of fire with red skin, two eyes (one eye always larger than the other), mouth, fangs, horns, five tentacles that are formed as snakes that have small yellow eyes, green tongues and fangs of their own, and often carries a pitchfork.

He is portrayed by Jim Fortier (one of the co-creators of Squidbillies), however, he was voiced by Brendon Small (the same actor for Dr. Cock) once.

He made his first appearance in "Double Truckin' the Tricky Two". When Granny asked Squid Jesus for the lottery numbers, he suggested for her to ask Squid Satan. But, Granny found him to be a 'confused individual' for he kept on telling her to perform various different evil deeds, going so far as to rip his favorite snake tentacle off of his body for suggesting to him to tell Granny to "pee in your neighbors brain".

Squid Satan is a master guitarist and uses this skill to teach Rusty how to play guitar in exchange for his soul in the episode "Mephistopheles Traveled Below to a Southern State Whose Motto is 'Wisdom, Justice, and Moderation". In the same episode, he sings the song called "Hoofprints" from a guitar.

Squid Satan's third and final appearance in the series was in the episode "Ga-Ga-Ghost". Where in that episode, Ga Ga Pee Pap as a ghost mistakenly believes him to be Red Jesus when he mistaken believes he is going to heaven by riding on a skeleton like dragon, only to realize to late that he is damned to spend eternity in Hell. 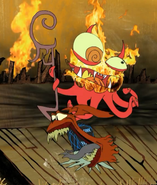