Small
The Squirrel is a recurring species that appears in Squidbillies. Their based off their real-world counterpart.

Squirrels are recurring creatures and characters that appear at some points in the series. The squirrels are colored brown and sometimes white. Squirrels are usually appear as normal wildlife. However like wolves, they sometimes seen in the audiences in some episodes like "Bubba Trubba", "Pile M for Murder", and "Velvet Messiah". Sometimes, the squirrel can be seen as a individual character or part of a species, depending on what episode they appear in. As dead squirrels are seen in a few episodes and their designs can differ from episodes.

Two dead squirrels are seen being rubbed by a freak/prevented sex addict named Latex Craig from both "Atone Deaf" and "Clowny Freaks". However, this was something previously seen in "Earth Worst", except those two squirrels turned out alive and after Craig leaves. These three squirrels then scatter away. Those squirrels also look different from any other squirrel.

A individual squirrel was first seen in the episode "Butt Trouble". In that episode, a brown squirrel eats a piece of cake, which was part of a another cake left by Early. Rusty was forced to aim and kill the creature with one of Early's shotguns, but then fails after they injures Granny with the said shotgun letting the creature get away.

A much different looking squirrel squirrel appeared as a lottery number in "Double Truckin' the Tricky Two". A squirrel is seen in the audience in Plumber Bubba's show in "Bubba Trubba".

A dead squirrel appear in "Tuscaloosa Dumpling". As Glenn's Wife mentioned that their mailbox was filled and stuffed with dead squirrels. A dead one appears later on and is put into the dog door of the house.

One individual squirrel appeared as a vampire in "Young, Dumb and Full of Gums". The ending of the episode however had a much different looking squirrel is later seen. However this one is dead when Early holds one to feed the Sheriff, as he eats it. Then the Sheriff spits it out into Early's mouth, including a leftover part.

A individual squirrel is also seen in "Fatal Distraction" sitting on wood after being heard by Rusty, Granny, and Reverend. Though Granny called it a "furry slut" and tried to beat it with a sign, she was holding and the Squirrel ran away.

A different individual looking squirrel was taped onto Early wearing a pink bikini as he was holding a microphone in "Dewey Two-ey". In "Forever Autumn". Rusty bends down a tree and three mutated squirrels fall and die as they fall on the ground, along with three more drop down. This was due to Dan Halen's toxic chemicals from his L.E.A.F. project that was strayed around the forest. 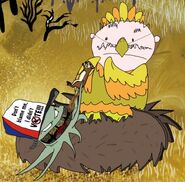