The Japanese are recurring minor characters in Squidbillies.

The Japanese are Asian and Japanese speaking men that appear as recurring residents to Dougal County and often appear in the background. Like the Mexicans, they originated from a different country that wasn't the USA and subtitles appear onscreen and are used for their language when speaking lines of dialogue. Usually over four of these Japanese men (or sometimes one individual) are seen together in their episode appearances.

They first appeared in the episode "Condition: Demolition!". They worked as businessmen for Dan Halen, and a Yellow Creature in a lab, while presumably studying Early Cuyler and Russell "Rusty" Cuyler for Dan Halen's body sprays such as sexual warrior body spray to Appalachian temptation male body stray during "Make Your Child Do Work Day" for Dan Halen's upcoming demolition derby. Dan Halen also loves when the Japanese men and Yellow Creature scream, as he mentioned the "Dreaded Gojira" to them, which he finished re-animating, though Dan Halen claimed that he was "just kidding" about it and when Rusty was going ride a fake car, Dan Halen claimed that the Japanese are "waiting."

Later in the episode, after Dan's demolition derby is revealed to be a hallucination and everyone is lighted on fire by a dangerous body spray, Dan Halen rides in a blimp and then answers "Yes, Japan?", mentions the name "Mishu Mishu", which is obviously a name for one of the Japanese and tells him that a "Tuesday launch is a go."

In "The Appalachian Mud Squid: Darwin's Dilemma", one individual is working as a hunter at a "endangered species game ranch" disguised as a fake liquor store with Dan Halen pretending to hunt down the endangered Appalachian Mud squid species representing Early, Rusty, and Granny Cuyler. The individual Japanese man mentioned that his brochure mentioned that Granny moved like a gazelle, which brings shame to his house of his own father and has a wife of his that is seen in the episode. Later in the episode, he claims that squid powder has saved his own marriage, he then shoots Granny with blood splattering, which the latter is turned into boots that he wears and the two are going on a airplane to Japan with Dan Halen.

Later in the episode, as Rusty enters the motel and wears a samurai outfit and takes the outfit off, the father is seen in a chair with Early wiggling his own tentacles at him, however, they are eventually spliced off by Rusty using a Kanata.

The father is turned off by this and picks up two of his limbs and walks away out of the motel, however, Early's squid beak then shows up for him, but he doesn't seem interested into taking Early's own beak, since he isn't a beak man. He then closed the motel door, and his son and two other Japanese men walk away from the motel, walking past Granny and Krystal, as they drive away in a limousine. Granny asked where they were going, she shows her beak and it states its "down to the clown", and Krystal asks them if they want to fart on a California roll. 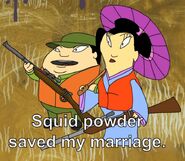 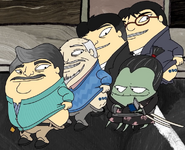