The Lake (referred as this by Rusty) is a unnamed lake, and is a minor location in Squidbillies. The lake is a large body of water located somewhere in Dougal County. This lake has been visited a few times in the series. There's not that much about this lake, except that it is home to aquatic creatures such as fish and a Giant Cyclops Squid. Early and Rusty meet this squid in the giant lake in "Survival of the Dumbest", while fishing.

In "Webnecks", Early and Rusty had a Super Computer on a boat with them, while using its radar to blow up the Dougal County Dam.

In "The Good One", Early and Rusty are on a boat with a bag full of Lil's offspring, and they were caught and encountered by Sheriff on a banana boat with red truck nuts, which was attached by a large police boat.

In the episode "Young, Dumb and Full of Gums", all of the citizens of Dougal County attack the lake's water, while they get angry over the lake, until the winter season where it starts to rain. This happened due to President Obama putting fluoride in their drinking water in the county.

A smaller lake full of fish was drained by Early pulling out a cog in "America: Why I Love Her."

In "Velvet Messiah", he poses as Jesus Christ while he shows all of the Dougal County citizens so he can walk on the water like the real Jesus Christ does, however, this last days to months such as Tuesday to January.

In "Return Of Gaga Pee Pap", Rusty and Ga Ga Pee Pap Cuyler travel to this via boat, but the latter kills fish in the lake by using dynamite.

Rusty and P-Nut go fishing in "Thou Shale Not Drill", and caught a fish, which resembles a catfish.

In "Gun of a Son", Early hid his 12 gauge shotgun in the lake, and enters the waters to receive back, due to incident with Rusty earlier.

Rusty's wife, Tammi and his son Macho Man Randy Cuyler, swam in this lake, along with himself in "Ink Is Thicker Than Blood, Which Is Thicker Than Water", while Randy has his own squid tentacles. 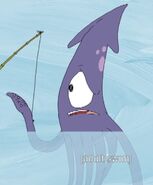