The Mexicans are a group of Spanish-speaking men from Mexico that appear in many episodes of Squidbillies.

The Mexicans commonly appear as background characters in the show a lot. Mexicans in some episodes want to take jobs. They usually don't speak, but when they do they speak Spanish. They all have identical faces, but different facial hair.

Most of the Mexicans in the series are male, however, female Mexicans are still present. Some Mexicans also attend church on Sundays.

The Mexicans are commonly named with stereotypical Mexican names such as "Miguel", "Fernando", and "Rodrigo."

The Mexicans have some roles in episodes such as "The Fine Ol’ Solution", "Need for Weed", and "Jose, Can You? Si!", with the latter episode having the Mexicans being immigrated by going back to Mexico. For example, in "Need for Weed" Lil' has been shown employing several of them (all in the nude) to work in her pot growing operation.

In "Asses to Ashes, Sluts to Dust", the Mexicans have shown interest into taking the jobs from other people such as in Early's efforts for Granny's gallbladder and painting walls and a crown molding in Donna's Ex-husband's house, despite him telling to put "no textures" of red paint on the wall, as one of them has to feed his family, and Snakeman pays nine dollars an hour for them, while he eats one of them.

In "Armageddon It On!, when Reverend is upset that he was rejected by God during the rapture, he then complains when The Mexicans were "chosen" and taken to the rapture and the next shot shows various Mexican objects that they left behind on the streets such as a soccer ball, a taco, a wooden plank, a piñata, a sombrero and Mexican clothes, with a shirt that has the number "58" on it and shorts.

In "Krystal, Light", a nude Mexican with a red wig replaced Dan Halen for Krystal, due to her fats.

Different Variations of The Mexicans[]

A Female variation of a Mexican is first seen in a photo in "The Fine Ol’ Solution". She becomes a background character in the episode "Ballmart" and a few more appearances in other episodes such as in "Jose, Can You? Si!" and "Ballad of the Latrine Marine". She is shown to live in a Motel with Rodrigo and their large Mexican family and she appears in "Trampled by Turtles."

A different female Mexican later appears in "Dove In An Iron Cage", she is shown taking to his husband later in the middle of the episode while at the prison.

A Mexican child is a female child version of the Mexicans seen in "The Fine Ol’ Solution", along with her mother she becomes a background character in "Ballmart". She is a part of a large Mexican family in "Jose, Can You? Si!".

A Mexican and squid family that appears in a photograph in the episode "The Fine Ol’ Solution". These characters have there own character page.

In the episodes "A Jailhouse Divided" and "Jose, Can You? Si!", there is a regular Mexican named "Rodrigo." In "S9E10", he is working at a meat factory making meat until he and a few other Mexicans did get immigrated by going back to Mexico. Before this, Early put him into the chitin slurry to hide him but got caught. He returned later in the episode with other Mexicans living in a house and a motel with a large family.

A large Mexican family appears in the episode "Jose, Can You? Si!", the father is Rodrigo and the mother of the family is the female Mexican. This family consists of brothers, sisters, one grandmother and two Mexican babies.

A Mexican man seen in a old yellow squid suit seen only in "Take This Job and Love It". He was eventually killed in the same episode by falling in a tube of "Zesty Ranch Baby Tacos" ingredients. He has his own character page.

A live-action Mexican seen in a commercial for "Zesty Ranch Baby Tacos" seen only in "Take This Job and Love It".

An Mexican Prisoner named "Jesús", which is the Spanish name for the first name of "Jesus Christ". He is seen in the Dougal County Prison in "Dove In An Iron Cage", He gets his lunch from Russell who works in the cafeteria as a prisoner. He talks to Russell in the courtyard by saying "Hola, Rusty", Russell says back to him "Hola, Jesús, hey I got a message for you", Rusty pulls out a pocket knife and stabs him saying "Keep your mouth you dirty snitch!, ohh! ow!". This causes the prison alarm to go off,

Jesus then said "oh, Rusty!", Rusty then said to him "sorry, Jesús If I didn't stick you, they'd think I was weak, you're fine it's collapsible made it in shop out of a radio antenna", Rusty was then brutally beaten by two police officers. He is shown later on as he is shown talking to his wife in prison, implying that he is married.

Later in the episode, as Russell escapes the prison interior by crawling in the air vent to the laundry room, Jesús is shown in a laundry room looking at his clock while Russell comes in of the dryer as the Mexican is shown carrying out the dried clothes, Rusty peeks out of the clothes saying to Jesús "muchas gracias, Jesus, good thing I didn't shank you, right?", in subtitles as he speaks "everything happens for a reason little strawberry".

Russell then said to him "no, it doesn't life is random and we all die alone", he then put him into a red book called "encyclopedia -r-" with a squid shaped marking, Russell is put inside the red book and Jesús puts the book in a cart and moves the cart next to a prisoner named "Ricky" in a room full of prisoners in jail cells.

Ironically, an another Mexican prisoner is seen in the same episode, though he has no name and doesn't speak.

An another Mexican named Rodrigo, who is very hairy and only appears in "Events By Russell", who wins the "Hairiest chest in Dougal County" competition and has a balloon crown put on his head.

The objects left behind by the Mexicans during the rapture. 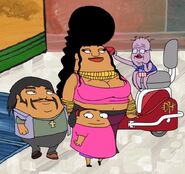 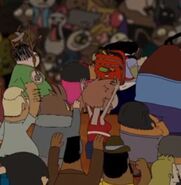 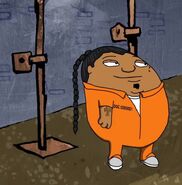 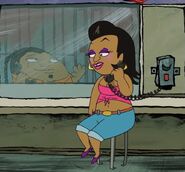 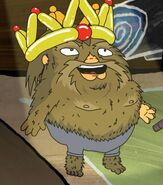 In the episode "Terminus Trouble", a group of different versions of the Mexicans show up here, as most of them have different skin colors. There are also some females, however, most of them ain't related to the the Mexicans or even are a Mexican aside from their designs looking very similar.

A Mexican-type background character that appears in some episodes.

The Japanese individual version of The Mexicans.

An African-American shaped individual variation that resembles one of the Mexicans, who works as a employee in Ballmart in "Southern Pride and Prejudice" and one of them makes a cameo in a jailcell in "Dove In An Iron Cage".