The Old Sweet Gum Tree is a historical landmark seen in Dougal County, since the war times, which is seen only in the episode "The Legend of Kid Squid".

The tree is considered to special because it is covered with different colors and flavors of chewed up gum from previous soldiers who put there gum when they were fighting as General Robert E. Lee also signed a peace treaty of Appomattox when the tree was just a sapling as he puts his gum on there.

During "The Battle of Atlanta" times, a Yankee is lynched on the tree, however, it was too small and the Yankee uprooted it and ran away but the five men shot him with their shotguns.

During "Pearl Harbor", a man put his gum on the tree, three Jets are seen in the air also crashed down to the tree.

An unseen solider named "Rick" had his name and written on it as "Rick Sux", as pointed out by Deputy Denny.

Early and Russell were driving one night from Sheriff until they almost crashed into the tree. Causing any harm to the tree would cause every citizen in Dougal County in anger, according to the Sheriff, which did happen in the end of the episode with Early poisoning the tree and a bag of dog feces was thrown at him for his own vandalism. Later on, the town's citizens, most notably Glenn, his wife, and Ellis did eventually heard about the tree being poisoned by him as what he was saying on the radio with Brock Bell. The protesting citizens eventually encountered Early coming out of the Sheriff's Office and the large group of citizens said that they are going to "Kill him!", while holding signs such as "Tree Hater", "Burn Cuyler" and "Tree Killer" and burning a Early inflatable. 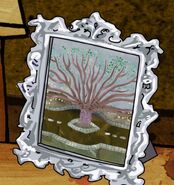