Take This Job & Love It
"This Show Is Called Squidbillies" is the first episode from the first season of Squidbillies. It first aired on October 16th, 2005 on [Adult Swim].

The backstory for the series, focusing on Rusty's conception and childhood leading to his reunion with his father, Early.

The show’s Narrator introduces the setting of Squidbillies which takes place in a quiet little mountain town nestled in the North Georgia Mountains, which has a Gas Station, a dance studio, and a Sheriff's Office. The town’s Sheriff comes out of the dance studio, in a ballet outfit, smoking a cigarette but starts coughing. The Narrator claims that from three years from now he’ll die of emphysema, while the Sheriff continues to stretch. A large building known as Dan Halen’s Sheetrock International is then introduced, which specializes in products such as sheetrocks, and a dangerous baby care product known as the Baby Hammock. The latter of which is responsible for killing infants. The building’s current CEO Dan Halen got another report of a baby that died from the Baby Hammock, and decided to sue the infant’s parents. During a lawsuit at the courthouse, the parents had violated Dan Halen’s copyright by calling the Baby Hammock as the term the Baby Death Trap, which Dan Halen was already using for the name of another product that had the same name.

The Narrator introduces more people that live in the town of Dougal County such as Space Baby, an alien baby, Snakeman, a Snake resident that kills and eats a nearby bystander, and Billy Morton, a young boy that has sticks for arms and wooden planks for legs that is also the star of a football team. The latter of which heads to the Sheriff and tries to throw his football, but falls onto the ground. Billy tells the Sheriff that he has to go back to practice but gets hit by a nearby truck, leaving nothing but his stick arms and wooden plank legs on the streets, as soon the Sheriff goes back to doing his ballet. The Narrator explains that this is the story of all the people that live in this mountain town, but was mostly the story of Early Cuyler, a green Appalachian Mud Squid, who is seen licking a pumpkin on the porch of someone’s house. He is then interrupted by a man who tells him to get off his porch, before Early lights him on-fire by throwing a flaming bottle at him which also burns the man’s house.

Early Cuyler’s real story begins fifteen years ago, where he was a young squid that fell in love with an obese woman from the Junkyard named Krystal, who asks to give her a Walkman before he can intimately touch her front butt. Early Cuyler, resorting in an armed robbery, steals a Walkman from a store clerk named Boyd at the local convenience store. Early returns to her to offer the Walkman to marry him but finds her with Snakeman in a community toilet, and forgot to get a tape cassette for the Walkman. Early returns to Boyd’s to steal a tape cassette named Company’s 10 from 6 but gets the wrong tape instead, and threatens Boyd with his 12 gauge shotgun. He was then caught by the Sheriff and was sentenced to prison for the next fifteen years. Meanwhile, his dear fiancé Krystal waited for him for over 12.14 seconds and marries Snakeman. Unbeknownst to Early, she was pregnant with a child named Rusty, who is shown in his mother’s womb along with a man who asks the Narrator for help. Krystal abandons baby Rusty onto a doorstep, and left with Early’s sister Lil Cuyler, a squid who owns a beauty salon. Lil finds Baby Rusty in a chicken bucket but drops him out of the said bucket, making him cry, as Lil wanted some chicken to eat.

Rusty was raised by Lil after that, and gives the Sheriff a perm while Lil just watches some television. The Sheriff discovers Lil’s Meth Lab and asks her if the lab is moonshine or not, due to moonshine being illegal in Dougal County which the lab wasn’t. Sheriff then starts speaking gibberish and commits suicide as Rusty shampooed him with over half a million dollars of crystal meth, Lil then smokes his head with a chainsaw. The Narrator then claims that the state stepped in and entrusted Rusty to a more positive environment with his grandmother, Granny Cuyler, before escaping via jumping out of the window. Granny also screams as she had a gigasm. Sometime later Rusty becomes lonely in the woods for a while and attempts to commit suicide with a rifle, but was saved by a wolf, although the said creature mauled his face after that. Rusty was raised by wolves for the next eleven years in the woods, but they would often attack and maul his face. The Narrator reveals that Rusty also stuffed himself with 130 pounds of nitroglycerin, which blew all of the wolves, and much of the forest, into a fine brown mist. This was all luckily a dream that he had. Rusty also has another dream where he is a rock-star in the band Rush, but wakes up from it and explains his dream to Lil while the latter continues to watch television. The Narrator cuts a dream but Rusty is shown humping a nameless creature in the next scene. The Narrator claims that this actually happened, and that this wasn’t a dream at all.

While walking down a dirt path Rusty discovers and meets his father for the first time in a chain gang of Prisoners, but mistakes his father for one of the chained inmates. The Sheriff, in tears, unchains Early so he can go with his son to start a new life with his kin, although Early does kill one of the chained prisoners. The Sheriff also frees Snakeman but gets devoured by him. At the dinner table, Rusty settles into a normal family life with his father and aunt Lil. Early teaches him some fatherly advice, as he is going on a date with two different girls on the same night, who don’t even know he’s a squid. However, Early tries to beat him with a stick due to him forgetting that he has a family and still remembers being in prison before being stopped by Lil. 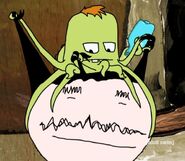