These tree monsters are a bunch of mutant tree monsters mutated by Dan Halen's toxic chemicals from his LEAF project in the episode "Forever Autumn." The mutated trees all have grotesques like appearances, due to their chemical mutations. The trees also have the abilities to speak in English, grow arms, eyeballs and mouths, that can cause damage and destroy property, and also eat people such as children.

The mutated trees come to life in front of the eyes of Early, Rusty, a family, and a bunch of other people, telling them that everything isn't fine, then pulls a human apart, scaring everyone, at the point of entering the Cuyler's family house for safety. The tree monsters follow all of them, and one of them eats a kid named "Dylan". One of them crashes through the wall, carrying a dead man on his branches, which Russell claimed that he wanted his money back.

A tree monster grabs and takes away Early's shotgun, while a another one crashes through the wall, with a handful of trees coming out of the broken walls at a time on each side, doing nothing but killing themselves with the same shotgun and speaking their last words such as "oh god!", one mentioned that to tell his pinecones that he would love him and a another tree is claiming that nature is not a toy. Others said that he was happy to be tree, "I never wanted this" and listen to Al Gore, of all people.

However, the shotgun runs out of bullets, and two of the trees end up beating themselves to death. The trees end up scaring and making a group of tourists flee from the house and to the toxic environment, while trees are doing random stuff such as ripping one of each other and lighting themselves on fire with lighters and gasoline. One of the Tree Monsters has a rope tied onto his branches, while carrying a much smaller version of these creatures, in a similar manner to a noose.

The tree monsters eventually end up making filming a commercial starring Dan Halen. The low budget commercial explained the current fate of Dougal County, using a greenscreen for environments, and used nothing but photoshopping live-action animals in the commercial. Dan Halen also mentions in the commercial that the tree's aren't adducting children or committing public suicide. Once the filming stopped, Dan Halen has a small tree monster come to him for makeup, and one tree monster holding a microphone, headphones, and wearing a hat, told him that they should bring more children, and that said one has a bag full of babies, leading to one infant being eaten by him. 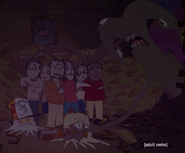 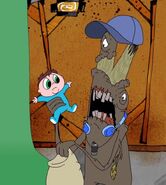